Google appears to be expanding auction-based pricing to Google Local Services Ads to many, if not all, businesses in home services verticals on November 16, 2020. Businesses that are already in these verticals have been paying a set rate per lead determined by Google. This rate would depend on the specific vertical and market. For example, HVAC contractors serving Dallas, TX have been paying $25 per lead in Local Services Ads.

On October 8, 2020 Google began testing the bid mode option for businesses in home services verticals in some markets in the U.S., Canada, and Europe, which allowed participating businesses to set the maximum amount they are willing to pay for a lead from Local Services Ads.

I can’t speak for participants in Canada or Europe but every U.S. account I checked across several verticals now has the bidding option. Even though the bidding option is present, the settings won’t take effect until November 16 (except for businesses allowed to participate in the test that began October 8).

What is the bid range?

The minimum and maximum bids will vary depending on the vertical and market, but the maximum bid is currently capped at 2.5 times the amount Google has set as the minimum.

What does the change look like in the Local Services Ads dashboard? 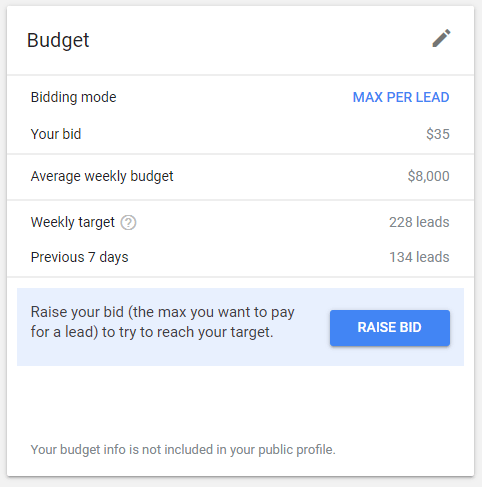 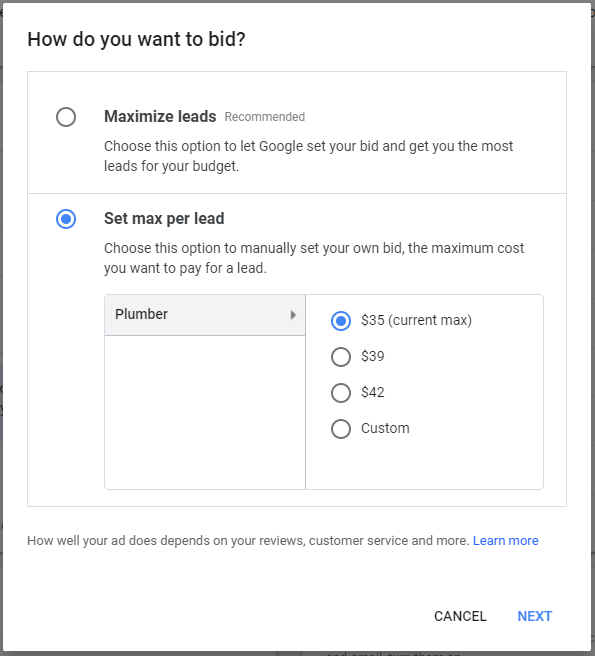 This should already look familiar to those in the newer professional services categories of Local Services Ads (like legal), but for those in home services categories, this is a significant change since they may have been paying the same flat rate for leads for 3+ years.

By default, the bid will remain at the minimum lead cost for their vertical and market, the rate businesses have currently been paying. But now they pick from a couple default options or choose a custom bid which will allow them to specify anything up to 2.5 times the minimum bid. In the example above, the business can set their maximum bid anywhere from $35 to $88. Another option outside of manually setting a bid is choosing the “Maximize leads” option, which Google recommends.

If you raise your bid will you pay that much for each lead?

No, raising your maximum bid from the minimum amount doesn’t mean you will pay that much for every lead you receive from LSA. This is auction-based pricing so your maximum bid will be the highest you would be charged for a lead, but it doesn’t mean that is what you will be paying each time. The actual price will vary depending on several factors, including the maximum bids of your competitors.

The Local Services Ads dashboard will show you the average cost per lead (in the ‘Reports’ section) based on the date range you have selected: 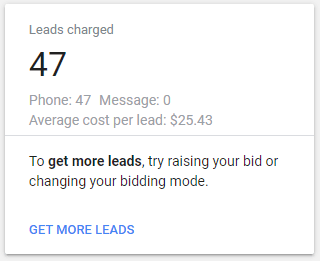 Will the highest bidders get the most visibility and leads?

Not necessarily but it will help. It’s not the only factor used to determine the order of the results. Responsiveness, review rating and count are also factors among others, including proximity. Raising your bid should increase the visibility of your ad but it isn’t the only piece of the puzzle.

What should you choose for your maximum bid?

You’re going to have to experiment as this may vary greatly depending on several factors, including how many advertisers there are and if they have increased their bid. If you have found leads from Local Services Ads to be beneficial and a good value, you may be fine with increasing your maximum bid. You can, of course, continue to pay the same amount you have been paying per lead, but you can expect your lead quantity to decrease, if not now, when competitors start increasing their bids.

If you are willing to pay more per lead but don’t really want to experiment, you can go with the “Maximize leads” option and give it some time to see what the impact will be. If you go that route, note that Google states, “It takes about 2 weeks to see accurate results as the model adjusts and learns about your business.” so you do want to give it some time.

Keep an eye on your lead flow and spend

Set your weekly budget high enough so it doesn’t limit the presence of your ad. I recommend leaning on the high side because the budget typically doesn’t get hit anyway. This can vary so check in often to make sure it’s not generating more leads than you can handle or spending more than you’re comfortable with. And you may need to continue to adjust down the road as competition increases.